The Guardian: We walked the world’s longest suspension bridge in Portugal’s natural playground

In Arouca Geopark near Porto, my sons dared each other to tackle white-water rafting and a scary, record-breaking bridge 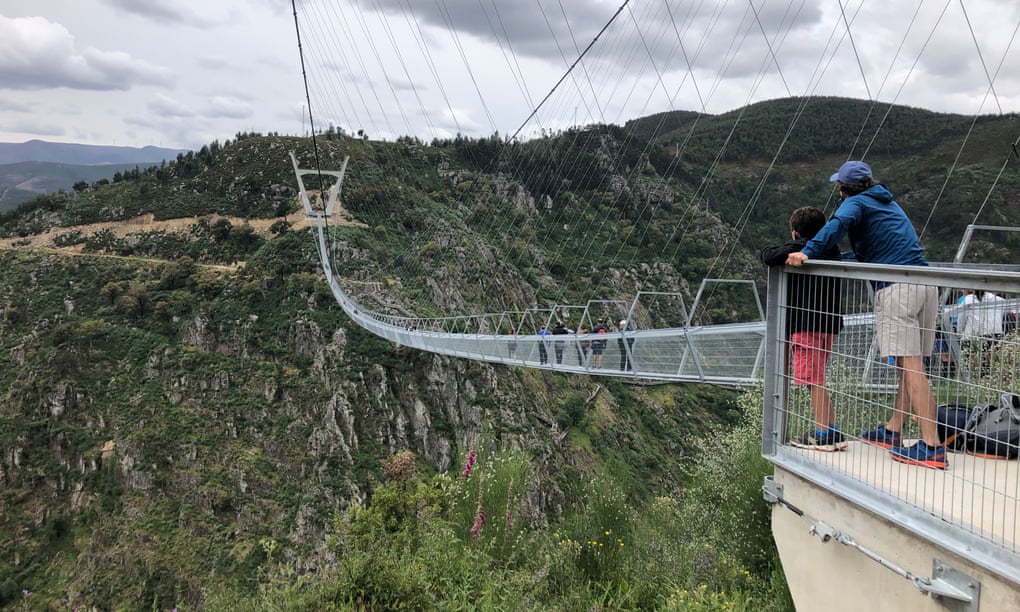 Three, two, one, and … jump!” yelled Rafael, our rafting guide. Into the air my youngest son leapt, not a moment’s hesitation, arms akimbo, legs kicking vainly against emptiness. Below him swirled the freezing, frothing waters of the Paiva River.

My emotions raced between swelling pride and sudden fear as I watched him disappear into the spume. Pride that he had followed his older brother off the edge of the five-metre-high boulder without a squeak. Fear that I now had no option but to do the same.

My leap was embarrassingly less silent. The moment my feet left terra firma, I let loose a long, piercing, terror-tinged shout of panic and adrenaline. Then, splash! Water everywhere, up my nose, down my back, into my brain. Wow, it felt good.

In that (retrospectively) blissful freefall, months of confinement angst washed off all three of us. This was the plan. With Portugal’s tourist market revving back into gear, my two sons and I had decided to escape for a weekend and get our fill of as much outdoor fun as possible. 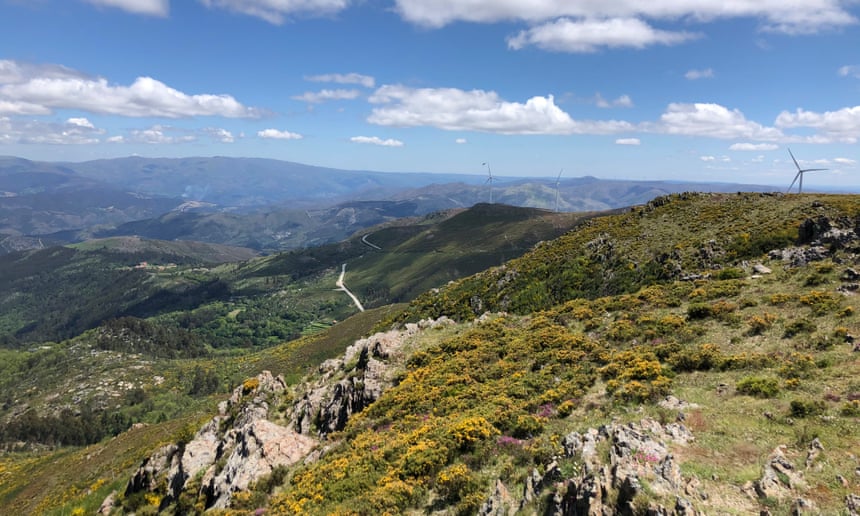 We made a beeline for the Arouca Geopark. A 328 sq km expanse of heather-strewn mountains and rushing rivers, it’s just a 45-minute drive from our home in Porto. Dotted with half-ruined hamlets and roaming cattle, it has become our go-to destination for fresh country air and hillside rambles.

Only the previous weekend, we had been camping near Cando, a classic mountain village built of local schist stone. It’s high in the park’s Serra da Freita hills, and the pigs outnumber the two permanent human residents by a ratio of three to one.

We had enjoyed an 8km yomp across the neighbouring valley from the old pit village of Regoufe, east of Cando, to Drave, a picturesque stone village in the base of a steep gully. Drave is inaccessible by car and fiendishly cold in winter: the last inhabitant left 20 years ago. The local Scouts now use it as a basecamp.

This time, we had another destination in mind. In May, the Arouca Geopark unveiled a new bridge over the Paiva, simply called 516 Arouca. Suspended over a precipitous gorge, the metal walkway crosses 516 metres of empty space, making it the longest such structure in the world.

Obsessive fans of the Guinness Book of World Records, my boys (aged 11 and 13) were sold on testing their nerve and giving it a go. But having egged each other on for days, the boys quietened dramatically after setting eyes on the bridge for the first time. 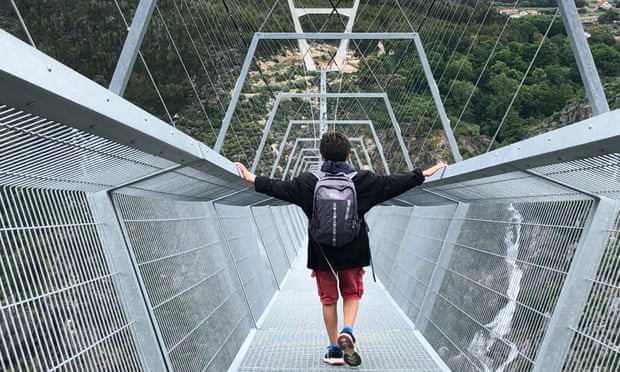 “You first,” said the youngest, nudging his teenage brother forward. His older sibling bravely obliged, stepping out on to the metallic grill surface with staunch determination. Hand in hand, his brother and I gingerly followed.

The narrow walkway has a slightly tilted, protective fence on either side so there is no chance of being blown off. Still, the sight through the grill-holes of the Paiva’s crashing waters far below brought a moment of queasiness to my stomach. The younger boy clenched my hand that bit tighter.

We reached the far side after about 15 minutes. Fuelled by biscuits and bravado, the boys made the return crossing at a virtual skip. In fact, the youngest insisted on me videoing his lone traverse in slo-mo. “The bridge,” I told him, when he looked at the results. “It wobbles.” This was true, albeit more gently than the shaky footage suggests.

Once back at the start, we turned our minds to the weekend’s other big excitement: an afternoon of white-water rafting. None of us had done it before so, again, it was with some trepidation that we made our way to the meeting point. 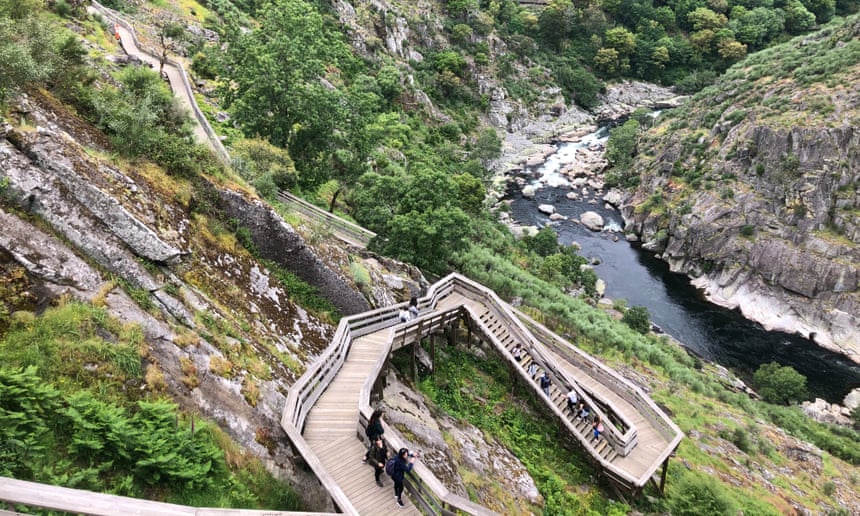 Luckily, between us and the rafts is a delightful wooden walkway (passadiço) running down the valley. After zigzagging down the ravine from the bridge, the soft-wood footpath cut a meandering path just above the water’s edge.

A visitor attraction in its own right, the route led us through a stretch of native woodland, its oaks and ashes, alders and hawthorns making a welcome break from the otherwise ubiquitous eucalyptus covering much of the park. Our bridge-crossing highs soon gave way to a nature-infused calm.

Rafael and his cheerful crew from Clube do Paiva soon put paid to that. Over the course of a couple of hours, we careered through a succession of rapids, our lives entirely in the hands of our expert oarsman, Gonçalo.

We gamely tried to respond to his commands – “forward”, “back”, “stop” and, weirdly, “bonsai” – but it was difficult to tell whether we were a hindrance or a help. Either way, it was amazing fun, our paddles in the water and our hearts in our mouths. 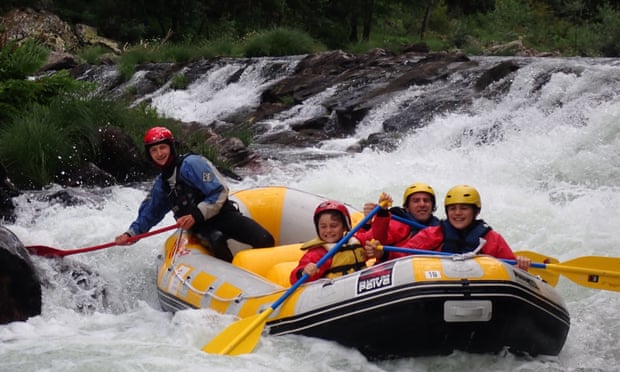 In the summer, when the river’s rain-fed water levels drop, Rafael swaps his rafts for canoes. Options for true adrenaline junkies extend to canyoning (abseiling down waterfalls, in essence) and river trekking (parkour in a wetsuit).

Arouca Geopark has much else besides adventure to commend it. As the name suggests, the Unesco-listed site is home to numerous geological peculiarities, including Cambrian-era fossils of seabed arthropods and a unique form of magma-based “birthing stones”.

In total, it counts 41 designated geo-sites, including two impressive museums dedicated to the above-mentioned phenomena. The most popular are connected by a network of 16 walking trails (including our Drave walk, no PR14). Serious hikers can tick off the lot in three or four days (GR28, 85km).

But for the time being we were done. A light Sunday bike ride along the flat, granite-pecked peak of Serra da Freita was all we could muster, but it offered panoramic views across the northern and central belt of Portugal. Our home in Porto felt a million miles away. Felizmente, it’s anything but.